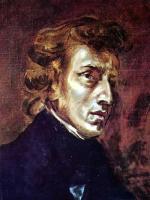 The Waltz Op. 69 n. 1 is a waltz for solo piano was written by Frédéric Chopin in September 1835 and is also known by the title apocryphal Waltz farewell. According to Wodzinski’s book in the volume Le Trois Romans De Frédéric Chopin, the piece was inspired by the composer Maria Wodzińska when he was about to leave the musician after a long holiday together. At the stroke of ten, with the diligence ready at the door, the young woman gave him the gift of a rose and the composer improvised the song on the piano who later baptized as Maria Waltz farewell. Beyond the anecdote, the waltz certainly retains an aura vague and loving. The original manuscript is now retained in the National Library of Poland in Warsaw. The waltz is in A-flat major with a time signature of 3/4 and tempo is marked at tempo di valse or a waltz tempo.

Thanks for your attention and good listening!

Translate in your language