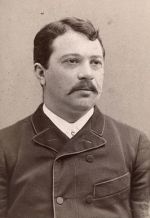 Gustav Lange was a German composer known mainly for his wonderful melodious salon music. He was born in Schwerstedt near Erfurt, August,13 in 1830 and was dead in Wernigerode July,20 in 1889. He received initial musical training from his father on the piano and organ, followed by conservatory studies in piano, organ, thorough bass, and composition. His teachers included August Wilhelm Bach, Eduard Grell, and Albert Löschhorn. Lange produced a large number of works, most of which were light and popular piano pieces of which he wrote around 500. Edelweiss op. 31 and Blumenlied op. 39 (alternatively known as Flower Song in English) are perhaps two of his best-known works today.

It was a popular music genre in Europe during the 19th century. It was usually written for solo piano in the romantic style, and often performed by the composer at events known as “Salons”. Salon compositions are usually fairly short and often focus on virtuoso pianistic display or emotional expression of a sentimental character. Common subgenres of salon music are the operatic paraphrase or Fantasia, in which multiple themes from a popular opera are the basis of the composition, and the musical character-piece, which portrays in music a particular situation or narrative.

Thanks for your attention and good listening!

Translate in your language